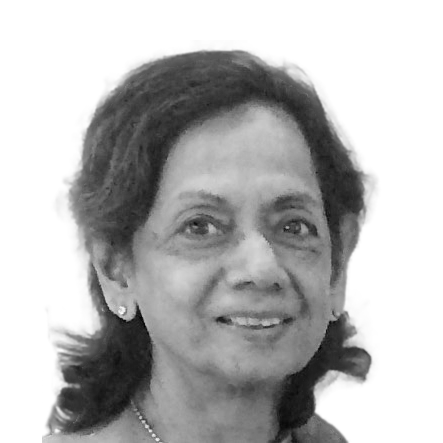 Indira Nath, MD, FRCPath, DSc(hc)  is Former Founder Head of Department of Biotechnology at the All… (more)

Indira Nath, MD, FRCPath, DSc(hc)  is Former Founder Head of Department of Biotechnology at the All India Institute of Medical Sciences. After retirement she continued at AIIMS as SN Bose Professor of the Indian National Science Academy, later as Dean of Medical School of AIMST, in Malaysia, Director of the UK Lepra Research Centre in Hyderabad and Raja RAMANNA Fellow and Emeritus Professor, National Institute of Pathology (ICMR). She is currently, Visiting Professor, Biosupport Unit of DBT, New Delhi, India. Recent activities include: Chair, ICSU programme on Health and Wellbeing, IAP's Responsible Research Conduct in Global Research Enterprise, Plenary speaker on Global Health at the UN STI meeting in New York in May 2017 and Global Health Index, London May 2017, Member planning and speaker for the International workshop on ‘Assessing the Security Implications of Genome Editing Technology, Hanover, Indo US Dialogue on Biosecurity, Johns Hopkins School of Health Security, Biosecurity committees of the Nuclear Threat Initiative, and Global Health Index by Johns Hopkins, NTI and the Economist which was released in Oct 2019. At national level she is on several committees of ICMR, DBT and Academic Council and GB of AIIMS (R). She has made pioneering contributions to immunology research in human leprosy with reference to cellular immunity and discovery of LSR2 gene in the leprosy bacillus. She was conferred numerous awards, notably: Padmashri (India), Chevalier Ordre National du Merite, France, Silver Banner, Tuscany, Italy, L’Oreal UNESCO Award for Women in Science (Asia Pacific) (2002), SS Bhatnagar Award etc. She is elected fellow of 3 Science academies of India, National Academy of Medical Sciences (India) ; Royal College of Pathology (UK); and The Academy of Sciences,Trieste (TWAS). She was conferred a DSc (hc), by Pierre and Marie Curie University, Paris, France.

Abstract:
Developments in Science are usually aimed at understanding natural phenomenon for promoting the… (more)

Developments in Science are usually aimed at understanding natural phenomenon for promoting the wellbeing of the planet and humans. While doing so, technologies tend to become double edged swords and can be used for doing harm. The area of Life Sciences is growing at rapid pace and it is often difficult for policies and laws to keep pace with its progress. In recent decade thus, Ethics for new science and Biosecurity have become major issues. Biosecurity is more than mere Biosafety of laboratories to prevent harm to scientists involved in hazardous experiments. It involves the protection of the general public and countries since infections do not respect geographical borders. Biosecurity is not well understood by many policy makers or other stake holders. Moreover, monitoring and incentivizing its practice along with new concerns for rapid advances or new knowledge has become a problem. With this view it has been suggested by the Nuclear Threat Initiative

Committee on Biosecurity that a Seal of Approval to appropriate researcher and/or institution be instituted to incentivize best practices. The recent discovery of CRISPR technologies and prime editing for human genome have become easy and cheaper. Though a blessing for improving crops and curing genetic diseases in the human, Ethical issues that rise for editing somatic or embryonal cells raise debates on best practices. Though, there is consensus that editing and implantation of embryos should not be undertaken at present, recent report of twins born after CCR5 mutation correction has been reported leading to the recognition that ethics not this are vulnerable. Thus glimpses of the future hold great promises which need to be accompanied by greater responsibility in the practice of new biology. This requires global harmonisation of practices, governance, gender equity, publications and coopertion of civil society

Abstract:
Integrity and Ethical Values in Conduct of… (more)

Integrity and Ethical Values in Conduct of Global Research

Seven global values encompass the ethical conduct of science and research integrity. These are Honesty, Fairness, Objectivity, Reliability, Scepticism and Accountability. Exact prevalence of irresponsible research practices is not known, however one study showed that

2 % of scientists admitted to having fabricated, falsified, or modified data or results at least once. Retractions and high profile cases of misconduct are increasing. Shifts in the research enterprise such as expansion of the research system, an accelerated pace of research activities, increased pressure to publish in prestigious journals, and heightened competition for funding are some causes. Researchers are responsible for the creation of institutions and practices to address the possible risks of existing and emerging technologies. Mentors have a special responsibility to help new researchers master the ethical dimensions of research. Mentors should provide career guidance, enhance networking among different disciplines, nationalities and marginalised groups (including women !) Institutions have responsibility to ensure, students and postdoctoral fellows are aware of rules and practices governing research.

Promoting global research integrity requires, adoption of good practices through education/ training, handling irresponsible behavior, protection for whistleblowers, investigation of all alleged transgressions , imposition of penalties when allegations are confirmed. Global codes and guidelines should be followed, which may differ in their details depending on cultures and specific legal and institutional frameworks but agree on many key issues.