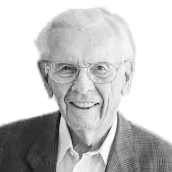 Herwig Schopper is the former (1981 – 2008) Director General of the European Organization for Nuclear Research (CERN), Geneva, Switzerland and former Director of the Deutsches Elektronen-Synchrotron (DESY), Hamburg. His fields of work include Optics, Nuclear Physics and Elementary Particle Physics. He has held various professorships in Germany and has been involved in directing several research institutes at the national and international scales. He is a member of the Board of Trustees of the World Academy. He is also Fellow of the Institute of Physics, London, UK; the American Physical Society; and various academies.

The Large Electron–Positron Collider( LEP) at CERN, with a 27Km circumference ring, was  proposed and constructed under his leadership. This facility allowed the verification of the standard model of particle physics, namely that it is a renormalizable field theory. Furthermore, it enabled the precise determination of fundamental parameters of the electroweak force, such as the W± and Z masses, and proved the existence of three neutrino families. The ring is still used today with the Large Hadron Collider (LHC).

Schopper’s vision of science without borders resulted in him becoming a founding father of SESAME, the laboratory for Synchrotron-Light for Experimental Science and Applications in the Middle East, which provides an extremely bright light source to investigate a broad range of domains from condensed matter to biology and archeology. In 1999-2008 he became President of the Preliminary International Council and later, after the formal foundation of SESAME, of the International Council. Without his dedication this international research facility would probably not have been built. SESAME was founded analogous to CERN, under the umbrella of UNESCO, with presently nine member states: Bahrain, Cyprus, Egypt, Iran, Israel, Jordan, Pakistan, the Palestinian Authority and Turkey. It provides an environment where countries with different political systems, traditions, religions and mentalities are able to work together peacefully.

Finally, following the SESAME adventure, Herwig Schopper was the founder of the SEEIIST, South East European International Institute for Sustainable Technologies, which recently took the decision to support the Hadron Cancer Therapy and Biomedical Research with Protons and Heavy Ions as the option for the Institute.