The stage is set for the 2022 World Science Forum (WSF), which will be held from 5 to 9 December at the Cape Town International Convention Centre.  This is one of the leading global events interrogating the role of science in society and will be held in Africa for the first time this year.

Speaking at a soft launch for the WSF on 10 November at the Iziko Museum in Cape Town, Dr Blade Nzimande, Minister of Higher Education, Science and Innovation, emphasised the importance of science in society.

Minister Nzimande stated that the government would encourage the global community to focus on the strategic role science should play as an instrument for peace and development.

"South Africa's hosting of the WSF and the focus on 'Science for Social Justice' is an invaluable opportunity to translate our commitment to the values of ubuntu and our shared humanity into concrete action," said the Minister.

He expressed confidence that the Forum would be a celebration of the power of science to enable humanity to progress; the ability of science to inspire us to care more and be more tolerant, to unite and not divide; and the wonder of science, which brings hope.

"It is a celebration, an undertaking and a commitment I would like to invite you all to be an active part of," he added.

According to the Minister, South Africa hopes to achieve three key goals by hosting the 2022 Forum.

First, to promote a global debate that inspires concerted action; second, to provide a platform and support for African leadership in global science policy discussions; and third, to profile and promote South Africa as a strategic partner for global science collaboration in response to societal challenges.

Dr Mjwara explained that investing in science and carrying out high quality research was important, but that if science did not serve humanity in any way, the Department was not fulfilling its role.

"We try, with the few resources we have, to make a difference in South Africa," he said.

For example, there is a large network of researchers working to understand the impact of climate change in sub-Saharan Africa, not just South Africa.  Talking about the effects of climate change and how currents on both sides of the continent affect communities that rely on fish stocks, Dr Mjwara explained that if science did not translate into biodiversity laws and ecosystem services, it would be useless.

With gender-based violence and femicide so widespread in the country, the Department has engaged with the Human Sciences Research Council, one of its entities, on how to bridge the gap between humanities research and societal problems that communities face.

"That is what we hope the Forum's theme will achieve – linking global science to the South African context while also ensuring that society as a whole benefits from the work of our researchers," said Dr Mjwara.

Prof. Moenieba Isaacs, Academic Coordinator for the University of Western Cape's Institute for Poverty, Land and Agrarian Studies, expressed her strong belief that conversations about social justice issues such as unemployment, inequality and gender-based violence should be approached from a participatory qualitative methodology perspective rather than a purely scientific perspective.

"We have to conduct research in such a way that we work with and for communities," she said.

She went on to say that while "with them" and "for them" were important aspects, giving communities a voice was even more important.

"We do not have to look very far back to slavery, colonialism and apartheid; we just need to understand where our communities are," Prof. Isaacs said.

To address societal issues such as inequity and rising unemployment, Dr Jyothi Kara of Iziko Museum, who is a National Research Foundation (NRF) postdoctoral fellow under the DSI/NRF Professional Development Programme, sees training and upskilling undergraduate and postgraduate students as part of her responsibility.

Throughout her time at Iziko Museum, she says she has found students at historically disadvantaged institutions such as the University of Western Cape and Cape Peninsula University of Technology and empowered them by broadening their skills and experience.

Mr Ronald Engelbrecht of the Western Cape Education Department highlighted that, in order to instil a better appreciation of the role of science among learners, teachers were expected (as per the relevant Curriculum and Assessment Policy Statement) to engage learners in the doing and knowing of science, not only by getting them to understand certain facts, but also by demonstrating those facts through experiments.

The Minister thanked the World Science Forum partnership for the honour it had bestowed on South Africa by selecting it to host the 2022 event.  The WSF partnership includes Unesco, the International Science Council, the InterAcademy Partnership, the American Association for the Advancement of Science, the European Academies' Science Advisory Council, The World Academy of Science and the Forum's initiator and custodian, the Hungarian Academy of Sciences.

Since its inception in 2009, the WSF has so far been held in Hungary, Brazil and Jordan.

Over 1 000 people are expected to attend the Forum, where topics such as open science, research integrity and ethics, and technology governance will be in the spotlight. 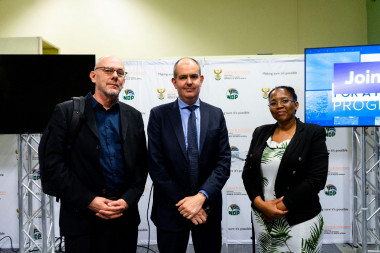