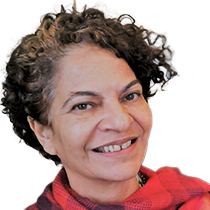 Lidia Brito assumed office as UNESCO Regional Director for Southern Africa based in Harare in 2022.… (more)

Lidia Brito assumed office as UNESCO Regional Director for Southern Africa based in Harare in 2022. She is a forest engineer with a Master and Doctorate in Forest and Wood Science from Colorado State University-USA, was born in Mozambique, and has been part of Eduardo Mondlane University staff since her graduation in Forest Engineering in 1981. She has held senior positions in Mozambique such as Head of the Forestry Department from the Faculty of Agronomy (1997-1998), Vice- Rector for Academic Affairs of Eduardo Mondlane University (1998-2000), Minister for Higher Education, Science and Technology (2000-2005), and Advisor for Strategic Planning and External Relations of the Mayor of Maputo City (2005- 2008).

She joined UNESCO in November 2009 as Director for Science Policy and Sustainable Development at the Natural Science Sector, in Paris, and in 2014 she was appointed UNESCO Regional Director for Sciences in Latin America and Caribbean region (UNESCO Montevideo Office). From 2018 to 2021, she chaired the regional organizing committee of the Open Science Forum for Latin America and the Caribbean (CILAC), a key regional space for debates and exchanges to promote sustainable policies throughout science, technology and innovation.

Artistic research and humanities for conflict transformation and social justice, a case study: UNESCO’s Art-Lab for Human Rights and Dialogue

Plenary session III. - Science for Africa and the world - How to unleash the potential of African science in global cooperation?