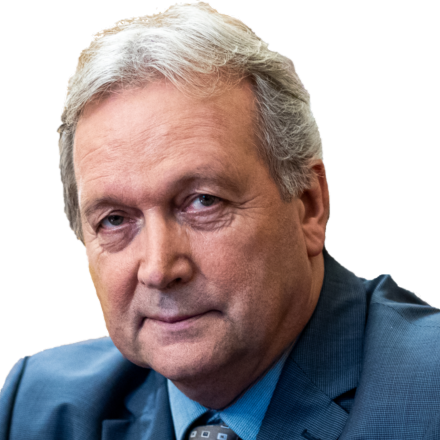 Tamás F. Freund, neurobiologist, President of the Hungarian Academy of Sciences, Co-chair of World Science Forum 2022, and Professor and Chairman of the Neuroscience Department of the Péter Pázmány Catholic University in Budapest. He graduated as a biologist at the Loránd Eötvös University in Budapest, and became head of department (1990), deputy director (1993), and director (2002-2020) of the Institute of Experimental Medicine. He served as president of the Federation of European Neuroscience Societies (FENS) from 2004 till 2006, and as member of the Executive Committee of the International Brain Research Organization (IBRO, 1998-2006). He is member of the Hungarian Academy of Sciences (since 1998), the Academia Europaea (London, 2000), the German Academy of Sciences Leopoldina (2001), the Academia Scientiarum et Artium Europaea (2001), the American Academy of Arts and Sciences (2014), and the Pontificia Academia Pro Vita (2019). His major international awards include: the Demuth Award (Switzerland, 1991), the KRIEG Cortical Discoverer Award and the Cajal Medal (1998, U.S.A.), the Kemali Award (1998) and the Brain Prize (2011, Denmark). In Hungary, he was awarded the Bolyai Prize (2000, Hungary), the Széchenyi Prize, (2005), and the Prima Primissima Award (2013). His main scientific interest is the functional architecture and physiology of neuronal circuits in the cerebral cortex.